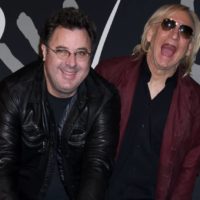 The Eagles — featuring Don Henley, Joe Walsh, Timothy B. Schmit, Deacon Frey and Vince Gill — will be performing their classic 1976 album Hotel California in its entirety alongside an accompanying orchestra and choir. The band will also perform a full set of greatest hits.

Produced by Live Nation, the tour will kick-off Aug. 22 at Madison Square Garden in New York City before wrapping up on Oct. 23 at the Chase Center in San Francisco. Tickets for the new dates go on sale June 18 at 10 a.m. local time through Ticketmaster.